When the entries for the 2011 World Time Attack Challenge 2011, we knew we literally had a matter of minutes before the field would be full – Entries in, payment confirmed and we instantly knew the challenge ahead!

The Clubsprint Class is virtually levelled by three key factors;

· The cars must be road registered
· The cars must be driven by the owners – No drivers considered ‘Professionals’ are allowed
· No ‘R’ rated (semi slick) tyres allowed, they must have a UTQG wear rating over 120

Fast Forward through the prep for the two cars (MY00 STI Sedan and MY08 STI Hatch) and a shakedown the previous week and we found ourselves at the Eastern Creek raceway with Sydney turning on 3 awesome days for the test and tune day followed by 2 days of World Time Attack Goodness! We had the cars setup exactly how we wanted and the drivers gaining more and more confidence in their E85 fuelled STIs. Throwing the keys of the Tunehouse MY08 STI to Pro Driver John Boston for a few fun laps on Thursday saw him return to the pits some 15 minutes later with a big grin, some awesome feedback. It was pretty clear to us that we were ready to go! 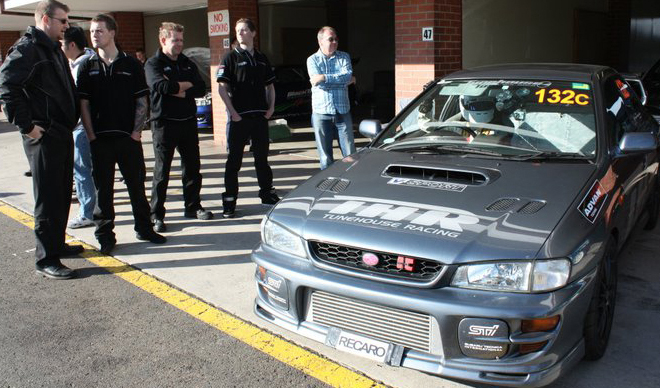 Ensuring we collected as much data for on the spot / later analysis for the entire event was critical.  Even after Thursday’s testing it was pretty clear what the cars were doing, what was working and how hard we were pushing the road tyres.  – clearly standing out as the limiting factor for both cars!

The MY00 STI with a very similar torque and power to the MY08 STI, was significantly faster being a much lighter car. The weight also playing a massive part as what grip we did have using the road tyres for this class. The lighter car was gripping much better for much longer, with David Lord reeling off effortless 1:45 second laps virtually all weekend! 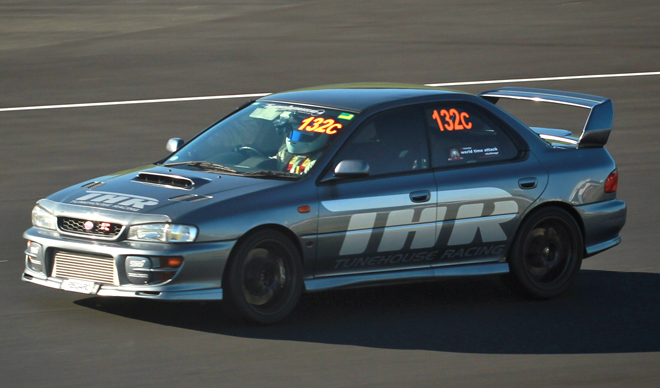 With the Tunehouse 08 STI now sporting the THR (Tunehouse Racing) livery fresh for the event, Fytos George was working hard on his lines and even though he was having fun early in the weekend spending most of his time sideways (his background is in gravel / forestry rally) he got serious toward Saturday and dropped his times an incredible 7 seconds per lap to a PB of 1:50.4400. That was good enough to claim a 21st place in the Clubsprint Class, ahead of some seriously exotic toys including a Lotus, RS Focus Rally Cat and even an AMG C63!

Checking the logs shows the potential for this setup as top speed and corner exit speed was as expected, with the sheer grip letting the car down when braking and pointing it toward the apex. 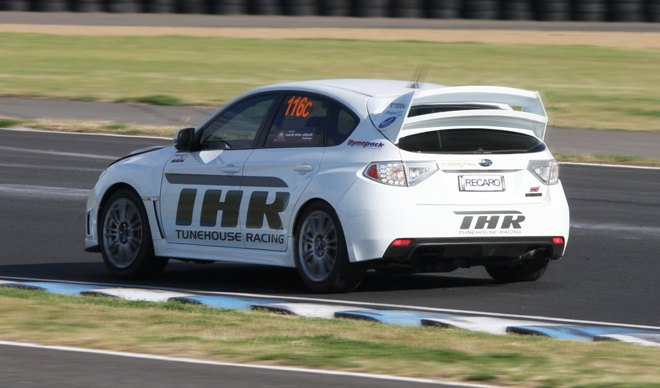 The 00 STI in David’s hands was performing faultlessly and even with only one week of development under the car’s belt, it was mixing it with some serious machinery at the pointy end of a very competitive field.

Not quite being able to find the grip that the EVOs and GTRs ahead of him had due to significantly wider rubber (Even the EVOs were running 265 + tyres compared to David’s 235’s) he ran his best time on the last session on Saturday with a 1:45.7590 earning him a 9th place among a field of 34 well-developed track and road cars.

David was, in fact, the fastest Subaru not fitted with a roll cage and the fastest car in the field without active diffs or Stability Control! Top effort from the driver and the Tunehouse team! 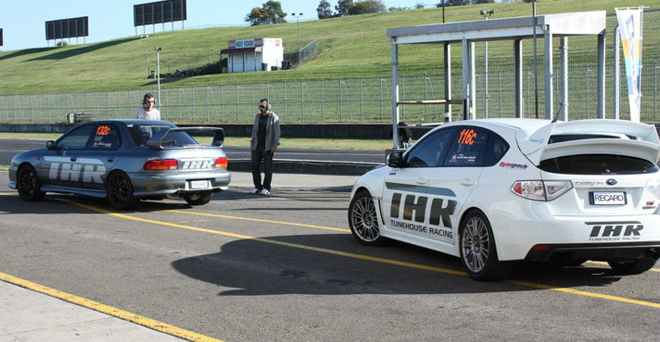 We’d like to thank Ian and the guys from Superlap for having the drive to get an event like this up and running and also support from the brands we trusted to get us through the weekend faultlessly; Cosworth, HKS, Whiteline, TEIN, EcuTek, Project Mu and Vipec!

Plenty of E85 and Sydney sunshine was consumed and a great time was had by all! Driving the car home from the event, already full of ideas on how we can go faster, one thing was clear – we’ll be back next year! Bring on WTAC 2012!