The 86 / BRZ platform comes from the factory with a Macpherson strut type front end suspension which is commonly known for its relatively compact size and layout as well as efficient costs rather than outright performance characteristics. That is not to say it can’t be made to perform quite well however it is most definitely a compromise by performance car standards.

The rear end is a more fitting independent double wishbone arrangement. Generally speaking the reason the setup in the rear is generally more ‘desirable’ than a Macpherson setup is the rate of angle and alignment change during the movement of the suspension. A Macpherson strut system generally has a significantly higher amount of change compared to a double wishbone system.

Simply put – static alignment is the geometry that is adjusted when you perform a wheel alignment. That is the alignment settings that your car has when sitting still. When we say ‘dynamic’, what we are hinting at as it what actually happens when the car is moving, accepting the forces of bumps in the road, acceleration, braking and corner (everything moves) and no online actually control arms, but bushes deflect and squirm under these loads as well so the static alignment often has very little to do with the dynamic conditions the car is subjected to.

Refer the video below by technical partner Whiteline regarding the static wheel alignment settings that your BRZ/86 comes from the factory with – in there is some interesting stuff.

The main point of contention is the lack of static camber in the front end – luckily at Tunehouse we already have the parts to fix this. Adjustable front strut tops will offer improved castor and camber which will offer better turn in, less push understeer and give the driver more control in all situations through more accurate geometry. What to know more? Email info@tunehouse.com.au or call (02) 9557 4000 to find out now!

The Subaru BRZ or ‘Toyota FT86’ as the platform is also know is reaching almost cult following – Developing a massive fan base in a very short amount of time.

The idea behind the car first came from camp Toyota – where engineers realised early that the a Subaru engineered power plant was going to be needed to get the centre of gravity as low as they wanted to provide the real driving balance they wanted to achieve. The rumours from the outset was the cars were going to be light, moderately powered and handle extremely well out of the box and give or take the styling queue from both Subaru and Toyota, it seems that’s exactly what they’ve done.

Great effort has been made to get the setup of the car right – this is no throw together. Even though it a joint engineering effort from both Subaru and Toyota it is certainly no parts bin special. The engine is located as far back as is feasible in order to achieve a front to rear balance of a claimed 53% front and 47% rear. The use of the boxer engine was purposeful in order to achieve such a low centre of gravity – the basis for which the handling was tuned. Macpherson Strut Suspension dominates the front end while a double wishbone setup is utilised in the rear. 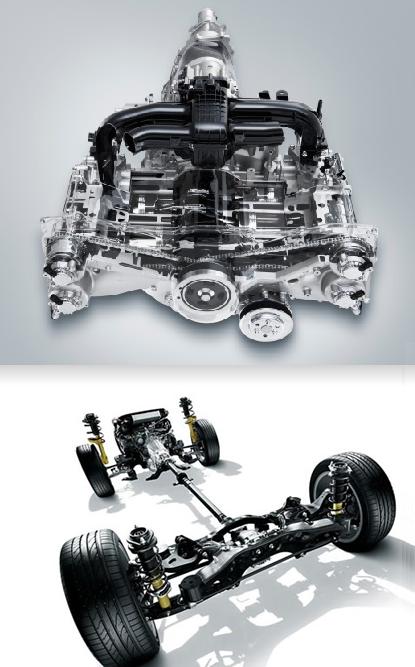 There have been rumours of factory turbo versions and all-wheel-drive versions however in Australian the money has been on the innovative aftermarket industry to take these on as their latest challenge. Enter your performance shop, Tunehouse.

Tunehouse is known around Australia for their development of a number of cars and have the support of some of the biggest tuners in the world. The release date has been set as has the price and Tunehouse’s own Jim Ghelis was one of the first to look at the two options available in Australia to see which would suit out market the best for development. For this we’ll stay a little tight lipped except to say the engineering and development has already begun! With the car still two months from delivery, Tunehouse can already help!

Tunehouse is also in discussion with many of Australia’s biggest producers and manufacturers of performance and upgrade products and will be looking to share the workload when it comes to fine tuning some of this gear on the track, street and on the strip. Stay tuned for updates as Tunehouse does what it does best and makes good cars great! Call Tunehouse now for the latest pricing and info on your upgrades!

At Tunehouse we take the guess work out of modifying your car and can help you get to your goals sooner and reliably. Call now on (02) 9557 4000 or drop us an email at info@tunehouse.com.au.