THR-86: local hero goes global but we’re not done with it yet!

The THR-86 is in such a high demand these days, it rivals Hollywood celebrities in its popularity.

Not only did it re-affirm itself as Australia’s fastest 86/BRZ at the 2014 World Time Attack Challenge it was also featured within the event’s Live Stream along with an extended interview with its driver – Josh Muggleton.

While at WTAC, the car caught the eye of HKS’ Export Manager Yoshiro Suzuki who made a special trip to Tunehouse to see the car up close.

Shortly after, THR-86 was whisked away to the Festival of 86. Sponsored by Toyota Australia and held at the White Bay Cruise Terminal, the event was a gathering of the best 86s in the country with the THR-86 in a prime display location.

Once again, our car attracted plenty of attention even from Toyota’s chief engineer (credited with the design of the 86) Tetsuya Tada.

Between all the shows and events, THR-86 didn’t get to spend much time in the workshop. It might have a cult following and a celebrity profile of a movie star but we are not done with this project yet. Stay tuned! 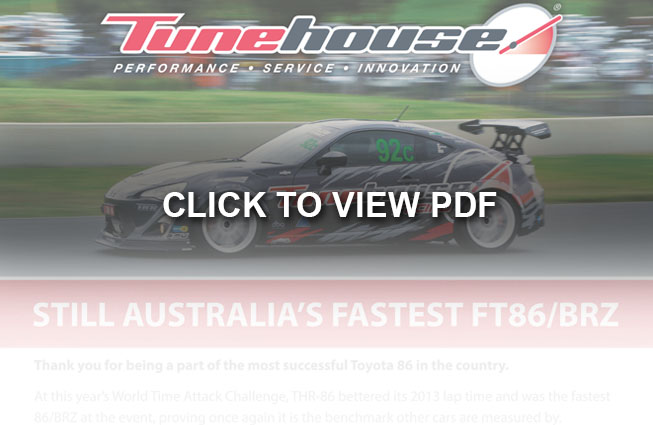