Tunehouse Dyno Room: One of a kind in Australia!

Tunehouse Dyno Room: One of a Kind in Australia!

It took about 12 months of building, late nights and head scratching but the Tunehouse Dyno Room / Cell was finally finished in  2007. Some of you popped in and seen the works in progress and many of you have seen it in use since and can attest, it was not a simple case of a few stud walls and wheeling in the dyno!

As a result the dyno room should really be called a mini wind tunnel which can now function without the assistance of a separate fan. Wind speeds of up to about 160 km/h can be achieved at altitudes similar to what you would find at Bathurst’s Mount Panorama. 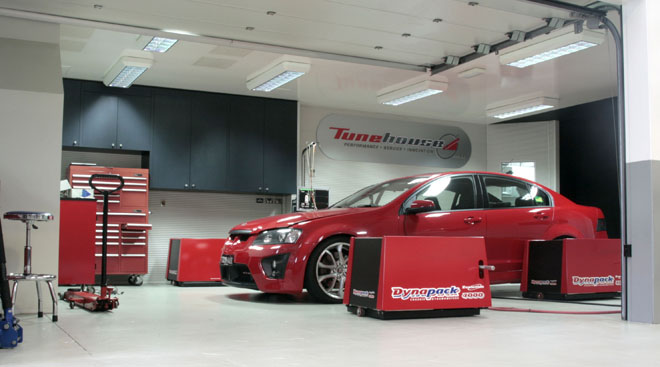 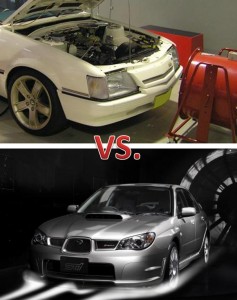 Many tuners will place a fan in front of a car when tuning with the hope that basically, they can keep just the coolant temperatures under control – Basically they are relying on air velocity direct into the radiator itself (nothing more).

The idea behind the Tunehouse room however was a little different. Jim wanted to simulate real world conditions. That is, he wanted a controlled testing environment that simulated genuine wind speeds and separate to the radiator, this included the kind of air flow under and around cars (the kind that impact engine and driveline temperatures, exhaust heat dissipation and under hood radiant heat) like they’re subjected to when out in the real world, driving on real roads at real speeds.

Jim saw little point in tuning a car at full load, wide open throttle 100 km/h speeds using fans that are barely able to replicate 20kp/h winds. Instead he wanted the ability to test, diagnose and tune cars in the environment that they’re actually driven in giving Tunehouse the edge with all R&D!

Jim, being the perfectionist that he is, spent over two years in the research and development of building such an international class facility prior to even starting the project.  Once the enormous suction fan (looks like a Boeing 737 engine) was installed,  the ‘tuning’ of the room began. Unfortunately it is not simply a case of sealing a room and putting a bigger fan in front it. In fact a number of aspect need to be taken into account just in terms of airflow, direction and pressure.

Careful testing and manipulation of both inlet and outlet plenums of the room then began. The way the air is drawn into the dyno (We are talking a massive amount of air here) and the way it is evacuated from the room have a massive impact on the air speeds that can be replicated and the air pressure at which they’re achieved.

Air flow and environmental characteristics where tested and a number of modifications were made to allow the simulation of a wide range of operating conditions – that problem with air pressure we saw very quickly became an advantage. Understanding it meant we could now replicate the relevant air pressures that cars encounter from sea level to as high as the top of Bathurst’s Mount Panorama! 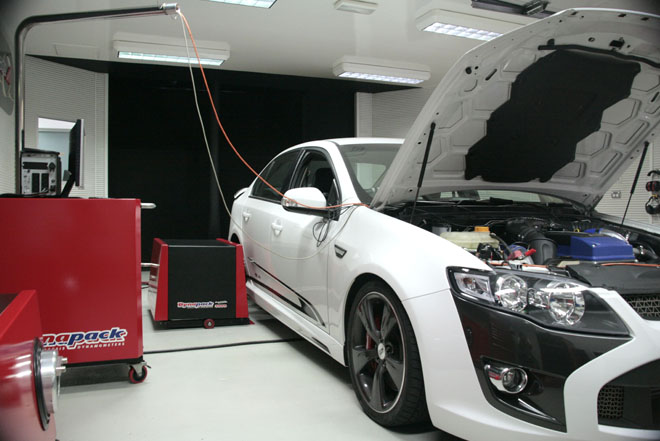 With so much effort put into getting the airflow right you would think we we’re ready to paint it and start using it wouldn’t you? Instead Jim knew exactly what he wanted and as such put a lot of time and effort into the acoustic design of the room. 2 Acoustic  Engineers were employed to provide input into the design and of the room and the material the walls are in fact made of.

Many rooms testing and tuning rooms around the world use generic building materials and the result is the sound of the car and engine bouncing off the walls back at it – Making it quite an unpleasant place to be, let alone tune! Instead, the Tunehouse room actually suppresses the unwanted resonance and ‘noise’ while amplifying the important frequencies to assist the tuning process. 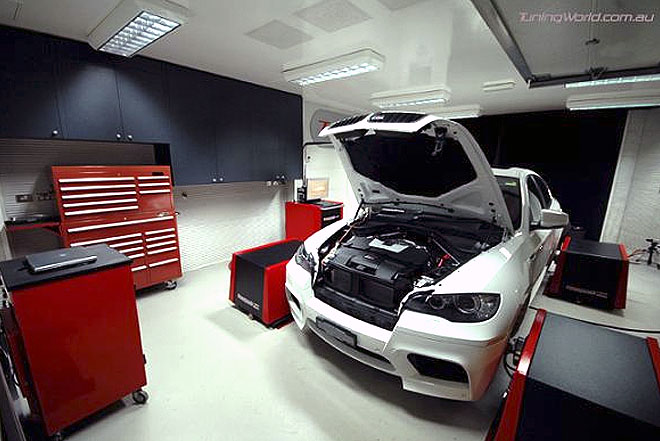 The major advantage now of the Tunehouse dyno room is that operating conditions, temperatures and air pressures can be simulated and reproduced to maintain a constant tuning environment. Jim has been a long time supporter of the Dynapack Dyno system for their unparalleled accuracy, repeatability and consistency with the only let down being the environment in which they’re being used – Now with the Tunehouse Dyno room up and running Jim has the ability to control the environment too! We have improved the quality of testing and tuning and can measure and repeat results as little as 1 rear wheel Kilowatt.

Example –  Adjusting load on an engine by tuning headlights on and off.  This might sound a bit ridiculous but for those who are after maximizing the return on their investment or when performing research and development, every KW counts.

Call Tunehouse anytime on (02) 9557 4000 or email us at info@tunehouse.com.au for the very latest pricing on virtually any performance upgrade or custom dyno tune!