Back in 2008 Tunehouse founder, owner and tuner Jim Ghelis saw an opportunity in the release of 6.2L LS3-powered HSV for a new development vehicle, and of course not bad idea for a daily driver! With 317kW at the flywheel and 550Nm of easily-available torque they are of course no slouch straight from the dealer floor, however as director of Australia’s leading performance workshop it was no surprise when the mods began. With the car loaded onto the dyno on that very first night for some baseline figures Jim instantly knew where to start.

Jim wanted to hear his LS3 – the factory exhaust system really wasn’t up to the task, either aurally or performance wise! It is almost legendary if you come into Tunehouse and ask about exhaust systems for your Holden – Jim tested more than 30 combinations of cats, headers, pipe size and mufflers before he found the sound and dyno-proven performance he was after. With the specification of the exhaust system nailed down the car then spent around 90-hours on the dyno testing the different designs of Intakes available. The factory air box was no doubt a restriction to power production and finally the THR Over the Radiator Intake (OTR) was born! With the throttle body placed squarely in the middle of the engine, a specially tapered intake placed over the radiator filters fresh cool air from in front of the radiator straight into the motor. 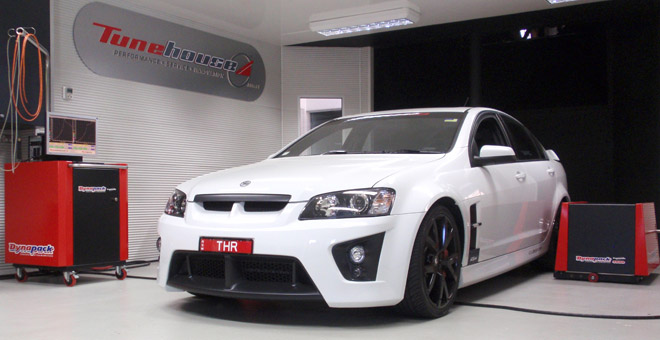 With the basic hardware to really open up the LS3 sorted, the car was treated to one last dyno session (laptop in hand) to find out what the added goodies were capable of. The result? The THR Spec S Upgrade which is available from Tunehouse and can be easily replicated on any HSV Clubsport (or VE SS V with some slight changes) will take your 317kW flywheel figure to 350kW with sharper throttle response and improved drivability. Not bad for a package that can be fitted to virtually any road going HSV. Jim enjoyed his new found powerhouse – but never intended to do things by halves and as such, the story continues!

The R8 really felt and sounded like it should have straight from Holden with the Spec S Kit sorted – Where to from now? With Jim spending so many hours on the dyno into the late hours he had his suspicions that the right camshaft upgrade would provide the next logical step for his R8 – and of course the next kit for his customers. There were many offerings available but little time had been spent in Australia working on cam profiles for the LS3 specifically. Jim was up to Camshaft number six from local suppliers before he realised nothing was going to have the idle, flexibility and improvements over the initial phase of tuning her was after. So, with a spreadsheet of data on his USB stick he scoured the world for a camshaft producer that would provide a billet cam to Tunehouse specifications at a reasonable price. With some quality valve springs and a new cam sprocket in hand the new cam was installed, dialed in and the car hit the dyno for another late night. The new combo took the output from 317kW to 380kW at the flywheel – dyno-proven on pump fuel with a slight lop at idle while offering even better throttle response. This was pretty clearly the Spec C package that Jim was happy to put his (and the Tunehouse) name on!

Luckily Jim had known from the outset what he wanted for his car and his customers – as the exact same camshaft upgrade that secured the success of the Spec C Upgrade was also specially designed to work with forced induction! To take the LS3 platform to the next level without compromising driveability a top mount supercharger was the only way to go. Assessing the different hardware that was available it was the Harrop kit that was chosen to work from. With a few tricks up Jim’s sleeve that you will only find from a Tunehouse package, the Spec R and final stage of performance upgrade was compiled. How does 560kW at the flywheel grab you? With the Tunehouse tickled blower installed and Jim waiving his magic on the dyno, the end result was one healthy R8! Completely repeatable – no special tricks and totally street-able, the Spec R Package had people ducking for cover when the throttle was stabbed out on the road and had a date with the quarter-mile to prove itself! 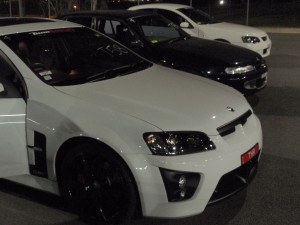 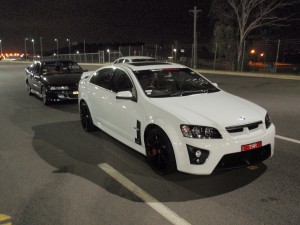 Rolling up to Sydney Dragway one Wednesday night, the THR R8 of Jim Ghelis pulled an effortless 11.9 sec run over the quarter in full street trim, on factory tyres without as much as an adjustment to tyre pressures! Jim wouldn’t even remove the spare, jack or the trim. Jim’s plan was to build an R8 that was capable as a daily driver and would run strong numbers where it counted without any sleight of hand, without any fuss and do it reliably! Genuine repeatable and dependable performance that added to the value and attraction of the car, never detracting from it! The THR Spec R equipped R8 was a resounding success! With the straight line performance, driveability and aural presentation of the car truly delivering the crisp experience Jim was aiming for – It was time to turn the Tunehouse development process to the suspension. The VE platform from Holden is consistent but hardly a driver’s platform. Tunehouse looked at the opportunities the factory platform offers and come up with a sensible package that helps tie it to the road without losing the refinement that comes with a family sized performance road car. Taking almost 12 months to complete, Tunehouse worked hand in hand with Tein engineers toward their new MonoFLEX range for the VE. With adjustable bump / rebound as well as adjustable height, the Tein MonoFLEX gave the adjustability and control needed to bring the ride height down while offering the best control for both the road and track!

The next step was to really transform the chassis dynamics – industry partner Whiteline were on hand to supply a range of swaybars, alignment correction and suspension bushes to sharpen the handling, correct the geometry and tame the 1700kg+ family tourer. After an initial test day at Goulburn’s Wakefield Park Raceway to collect some tyre data with the car pushed, the feedback was impressive. Again on the factory road tyres Jim’s THR R8 could be repeatedly clocked at 1 minute 10 second laps – easily the kind of lap times at Wakefield one would expect from an all-wheel-drive Mitsubishi Evo or Subaru WRX STI on compound track tyres!

Jim reports the THR R8 is now a well-rounded road warrior that is ready at the drop of a hat to have some serious fun at the track or on the strip! Stabbing the throttle has passers by wondering if it is the end of the world and although his tyre bill may at times constitutes an economic stimulus package, it is seriously fun for a daily driver that can take his kids to school and up the freeway in comfort.

Call Tunehouse now on (02) 9557 4000 or email info@tunehouse.com.au for the latest updates, info and packages available for your performance car! Or, if you prefer, feel free to drop into the shop anytime yourself and checkout the shop while meeting Jim and the Tunehouse team.