Under the Tunehouse banner at the 2011 World Time Attack was Brian and David Lord’s MY00 STI. Prepared specifically to compete in the Clubsprint class of WTAC by the Tunehouse crew, the STI underwent a birthday of mammoth proportions.

Owner Brian and his son David have owned the car since new and in its time it has seen a number of guises as a road and WRX club super-sprinting warrior – none of which compare to its latest incarnation. Being a GC8 shell it is one of the lightest STIs to be produced – making it an ideal platform for any racing application.

The irony however, is most of the cool things that set the MY00 STI apart from its WRX counterpart have been long forgotten in Brian’s search for a serious Clubsprint contender! STI 5 speed? Gone, making way for a careful selection of STI 6 speed and rear diff. Factory 2L including forged pistons? Also gone, try a 2.6L Cosworth crate motor including billet crank and Variable Cam Timing! Even the red (must be faster right?) inlet manifold has been scrapped in favour of a Cosworth item including Polycarbonate TGV deletes (also) from Cosworth! As Australian agents for Cosworth, Tunehouse’s Jim Ghelis had the engine package on route while he started to get the ball rolling on the wiring required to get the VIPEC talking to the new engine including getting those VVT’s up and running for the fattest torque curve possible! 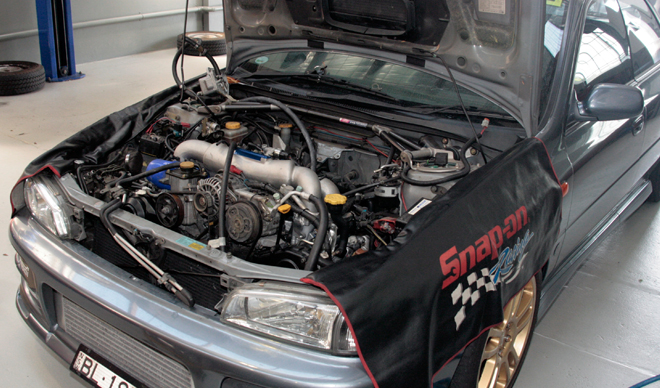 While the engine was being run in just weeks prior to WTAC 2011, the car was in and out of Tunehouse benefiting from a serious fuel system capable of supplying as much E85 as this combo is ever likely to consume – and some. All fuel lines were updated with Dash 8 E85 proof lines: from one end of the car to the other, all in search for absolute reliability and consistency for when the car is being used in anger! With the 2L Surge tank and massive 1500hp capable external fuel pump feeding 2000cc injectors, the run-in engine came away from a romantic night on the dyno with Jim Ghelis sporting 385 kW and 650Nm at the wheels. As per Jim’s style, the car even drives like factory when in traffic! 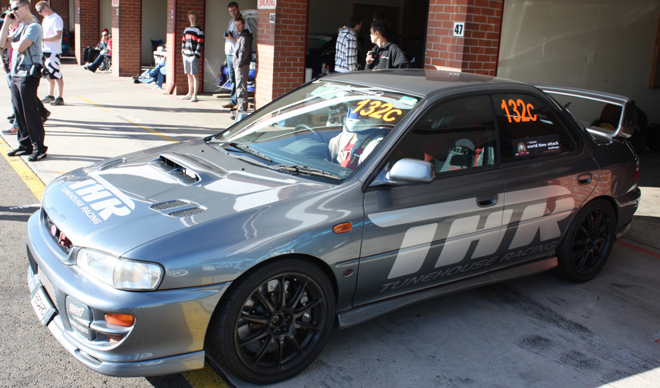 The car was already fitted with TEIN SuperStreet Coilovers from a previous visit and a quick inspection saw them retained for this event – as for the rest, Whiteline was quickly called upon to replace almost everything else! With grip likely to be the deciding factor on the day, the guys at Tunehouse knew only too well the suspensions job is to keep the tyres in contact with the ground as much as possible! With some very special gear and a Tunehouse top secret wheel alignment in place, testing soon proved they had every square inch of tyre contact patch working hard! A last minute, albeit planned upgrade to the brakes saw six-pot Alcon calipers bolted on the front and two-pot Brembos on the rear, all in time for the test and tune day, prior to WTAC – and did this thing move and stop?!

Check out a detailed coverage on our 2011 World Time Attack Challenge report. Let’s just say great results were achieved, lots of data collected and plans hatched! More grip and more development is already on the cards, this will be one car to watch out for at WTAC 2012!