When this STI arrived at Tunehouse, the client was very specific about his needs! An engine build was in order and he only wanted the best. This client had a target power figure in mind (more on that below), and he wanted the car to drive like factory – yet wanted a flexible enough result it would allow him to complete his daily commuting duties, show up some exotics at the traffic light grand prix and let him genuinely enjoy the occasional track day.

We’ve spent considerable time with the Subaru EJ series engine in our time and have found the limitation of each incarnation. The late model EJ25 as fitted to the WRX and STI is factory fitted with fly by wire throttle, Dual (inlet and outlet) Variable Cam Timing, Hypereutectic pistons (high silicon content pistons designed to be quieter than ‘forged’ pistons), Active Tumble Generator valves (TGVs) and the Subaru trademark top mount intercooler. It was pretty clear by now, absolutely none of that factory hardware was to remain as Subaru intended!

After weighing up the requirements of the build, it was clear we needed a solution that would get the STI back up on the road as soon as possible without cutting any corners. Being australian distributors for Cosworth, it wasn’t long before we started to assess the Cosworth range of assembled long motors. Having a long chat with the owner over his plans and budget, the order was placed. A Cosworth long motor for the Subaru provided all the reliability and potential for power we needed with minimal delays. The 2.6L option was chosen (see break out box for specs) and it was left to us to ensure a solid mix of bolts-ons were on hand to finish the project while observing the client’s needs. 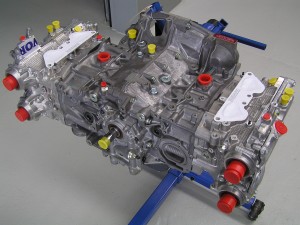 When the crate motor arrived, it came along with a few other parts from the Cosworth Catalogue we ordered including their High Volume Air Intake Manifold and their TGV Delete Kit. These two additions to the long motor were to provide the best possible flow of balanced, unhindered and cool air into the new motor as possible. Once the new long block was fitted with all the necessary ancillaries (remember this is a daily driver) such as air-con and power steer – attention turned to the supporting bolt-ons.

A Tunehouse Spec, 500hp Garrett cored turbo was fitted to a set of custom THR Extractors and up pipe. A Tunehouse recommended Stealth Front Mount Intercooler and Cold Air Intake was chosen and fitted as the STI came together. The Front Mount was chosen in order to offer significant improvements in overall flow (horsepower) while keeping temps and consistency of performance in check.  The addition of a front mount doesn’t necessarily mean showing it off to everyone though – as a perfect example of this, this one is powder coated black and can barely be noticed by passing traffic. 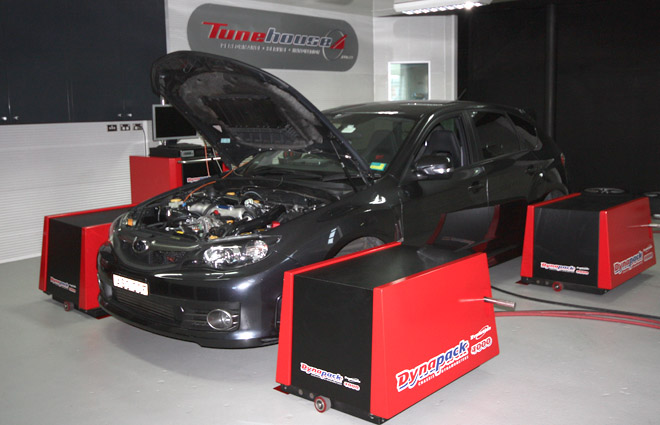 Tunehouse recommended 800cc injectors were fitted and the new engine was wound over – final checks were performed, the mapping was modified to suit the larger injectors and finally the refined, yet boost hungry 2.6L STI barked into life.

We know only too well how important the bedding in procedure is to a new engine and treated it as if it were one of our own! To confirm everything was doing what it was told, the STI was loaded onto our Dynapack hub dyno while Jim fired up the EcuTek software. A full custom dyno tune was performed and the engine was put through its paces. Jim went through every aspect of the software ensuring it was setup to cope with the Cosworth head and cam package as well as the Tunehouse recommended fuel system upgrade and turbocharger.

At Tunehouse, we’ve believed in the benefits of flash tuning for some time and pride ourselves on using the best and having the most thorough understanding of the software to ensure we can offer our clients the very best possible result. In this instance, EcuTek was chosen for its unparalleled access to the Subaru ECU and ongoing features, support and updates. The same principles we’re used when we chose to purchase and setup the Tunehouse Dyno Wind Tunnel. Voted Australia’s best dyno tuning cell, Jim uses and recommends Dynapack Hub dynos for their flexibility and unmatched access to data from each and every car. Only the best diagnostic equipment find their way into the Tunehouse tuning cell. Jim himself wouldn’t have it any other way!

It was clear the fresh combo was capable of 345kW on the Tunehouse dyno. Initial testing showed the STI was willing to stretch its legs this far all day at this level and after a chat with the owner it was clear this above and beyond his expectations! With Jim’s emphasis on reliability and genuine street-able, useable torque; the Cosworth Equipped and Tunehouse Built STI was delivered rolling up consistent 300kW and 500+Nm with plenty of wriggle room for ‘later’ (see dyno report below as driven away). Driving the STI on the street is where the fun is had though and the MY08 STI doesn’t leave you wanting. Pulling away in any gear creates a sense of urgency a lifetime away from what the Subaru engineers had in mind. Ensuring this STI is capable in all areas, this specific STI is also fitted with a host of suspension and braking mods to turn this into a real weapon in any occasion. Lift it onto a hoist and you will instantly notice the car benefits from most of the Whiteline catalogue, including; Anti Lift Kit, Upgraded Front and Rear Adjustable Swaybars, Roll Centre Correction Kit as well as diff and cross member mount bushes for the most confident feel on the road. Holding up each corner are a set of Bilstein adjustable (bump / rebound / ride height) Coilovers and stopping is courtesy of the big factory Brembos, albeit clamping DBA 4000 Series rotors front and rear with Sports brake pads.

This car is a great example of Tunehouse delivering a client the exact driving experience our client was after! At Tunehouse we have a range of upgrade packages to suit most late model high performance vehicles and more to the point; we know how to deliver a real exceptional setup to suit even the most specific needs! Call Tunehouse now to discuss your special project on (02) 9557 4000 or email on info@tunehouse.com.au for all the top brands!